31 May is celebrated as the ‘World No Tobacco Day ‘(WNTD) by the World Health Organization (WHO) and other global associates universally. The yearly expedition is a great opportunity to educate children and adults about the ill-effects of tobacco use on the immune system, habitat and surroundings. 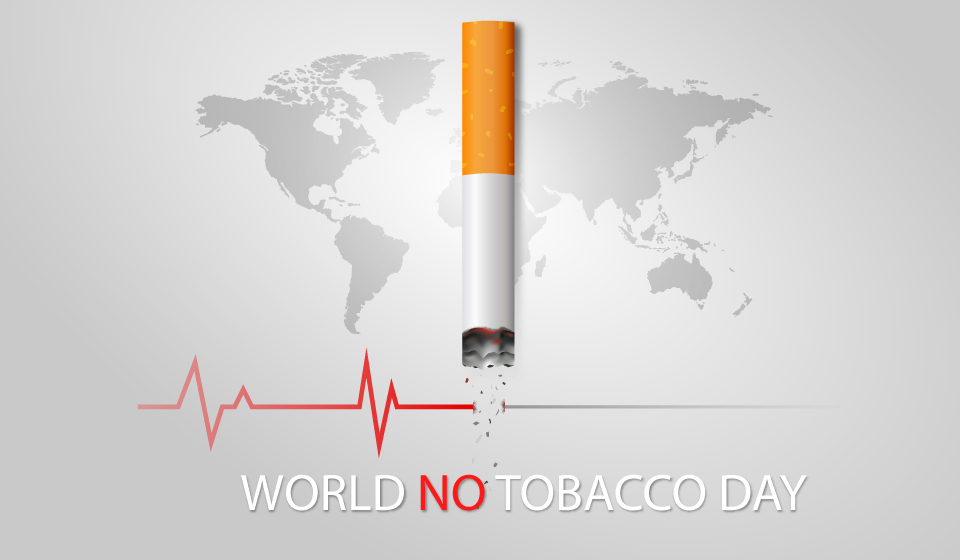 31 May is celebrated as the ‘World No Tobacco Day ‘(WNTD) by the World Health Organization (WHO) and other global associates universally. The yearly expedition is a great opportunity to educate children and adults about the ill-effects of tobacco use on the immune system, habitat and surroundings.

Since the beginning of 2020, the menacing and virulent effects of tobacco consumption has had its aftermath on consumers due to COVID-19 pandemic. Tobacco users are more at risk of Covid 19 infection, and several can be asymptomatic carriers.

Usage of tobacco has a detrimental impact on the environment and society. Any form of tobacco is harmful for health and leads to biological, emotional and psychological imbalance in a human being.

Tobacco is a leading cause for chronic diseases like cancer, tuberculosis, cardiovascular and respiratory problems, pregnancy complications, etc.

Consumption of tobacco in the form of smoke leads to oral and lung cancer, stroke, coronary heart diseases, cardiac arrest, TB, asthma and has adverse effects on the well-being of any individual. Smokeless tobacco usage causes head, neck, throat and oesophagus cancer and various dental diseases. Electronic nicotine delivery system (commonly known as e-cigarettes) is a form of heat liquid which makes the user inhale the aerosol, which may be nicotine free.

8 million smokers die every year, out of which 7 million are direct users. The rest 1.2 million deaths are from passive smokers, who are exposed to the subsidiary smoke. 65,000 of them are children. Smoking tobacco leads to 90% of lung cancer deaths in a year, more than breast cancer deaths in women, and 80% of chronic obstructive pulmonary diseases. 80% of the world’s tobacco users are from lower or middle-income countries. 1 in 3 countries in the world monitors the tobacco epidemic amongst teens and adults, which accounts to 38% of the global population.

HOW TO REDUCE TOBACCO USAGE

For tobacco consumers it is better to quit all forms of tobacco, thinking about the health impacts of themselves and others. Tobacco has no health benefits, instead, affects each organ in the body. Consumption of tobacco usage can be reduced with the help of a few methods which will eventually lead to the cessation of it.

1. Pictorial health warnings: Graphical images on the packaging showing the harmfulness of tobacco can have an impact on the user and make the individual quit the product.

2. Prohibition on advertising and promotion of tobacco products: Having a ban on the direct and indirect promotion which includes advertisement on television, print media to brand promotion, sharing and free distribution.

3. Sales restrictions: There must be limited sales on tobacco products with the supply being cut down.

4. Terminating black market: With lesser supply, the black market must be kept at bay with a check on illegal price hikes from vendors and third parties.

5. Tax increment: Increasing the tax on tobacco products will lead to a curb in the usage amongst youth and people with low-income levels.

6. Control on illegal and unlicensed import of tobacco commodity: Smuggled tobacco products is a matter of growing concern, and the matter must be looked upon seriously.

7. Awareness campaigns need to be organized by the government of states and counties, giving a clear message to “QUIT” tobacco.

8. Usage of tobacco products must be forbidden from public places.

9. Effective monitoring and surveillance of tobacco usage amongst minors and adults.

10. Shopkeepers, store owners and dealers selling tobacco to minors must be prosecuted and imposed with a hefty fine.

India became a Party to the WHO Framework Convention on Tobacco Control on February 27, 2005. The Government of India launched the National Tobacco Control Programme (NTCP) in the year 2007-08. Government has imposed certain rules and regulations for the consumption of tobacco and its products and has undertaken actions and projects to curb tobacco usage. In a vast country like India, a major public health challenge is to deal with the 250 million plus adults who consume tobacco products.

1. Ministry of Health and Family Welfare

2. Regulation 2,3,4 of Food Safety and Standards (Prohibition and Restrictions on Sales)

4. The Cigarettes and other tobacco products (Prohibition of Advertisement and Regulation of Trade and Commerce Production, Supply and Distribution) Act

7. WHO Tobacco free initiative in India

It is evident that with the harmful effects of tobacco, all states and countries must ban and eradicate the use of tobacco with immediate effect. India has played a massive role in the world-wide tobacco control programme, initiating schemes and projects in national, state and district levels to restrain tobacco usage.

Several litigations like K Ramakrishnan and Anr. versus State of Kerala and others, Murli Deora versus Union of India were filed between 1999 and 2001 for an individual’s right to smoke-free air. In 2004 the GOI took strategies to cut the demand and supply of all forms of tobacco. Tobacco product laboratories were established as directed by COTPA, in the year 2003, to keep a check on the scale of tobacco consumption.Many other initiatives have been embarked to control tobacco consumption. A few years back, one national and five regional workshops were conducted to make people aware and cut down the usage across the nation.

Let the tobacco users take a unified pledge this ‘World No Tobacco Day’ and make it a serene place for survival for themselves and others, making a ‘Tobacco Free Environment.’

India, being a major stakeholder in the tobacco control programme should work unitedly and control the supply and usage of tobacco, as tobacco possesses threat to the entire human race and the environment.